UPDATE 2: Patches now released from Microsoft CVE-2021-34527 – Security Update Guide – Microsoft – Windows Print Spooler Remote Code Execution Vulnerability  (Still missing some operating system)  CVE updated to announce that Microsoft is releasing an update for several versions of Window to address this vulnerability. Updates are not yet available for Windows 10 version 1607, Windows Server 2016, or Windows Server 2012. Security updates for these versions of Windows will be released soon. Other information has been updated as well. This information will be updated when more information or updates are available.

There is a new high severity vulnerability dubbed Print Nightmare, which exploits a vulnerability in the Print Spooler service. This vulnerability can provide full domain access to a domain controller under a System context. To be able to use this exploit it requires that you authenticate as a domain user. You can see a short video of the exploit here https://lnkd.in/dgqEjwN

The vulnerability itself is possible because, The Microsoft Windows Print Spooler service fails to restrict access to the RpcAddPrinterDriverEx() function, which can allow a remote authenticated attacker to execute arbitrary code with SYSTEM privileges on a vulnerable system. 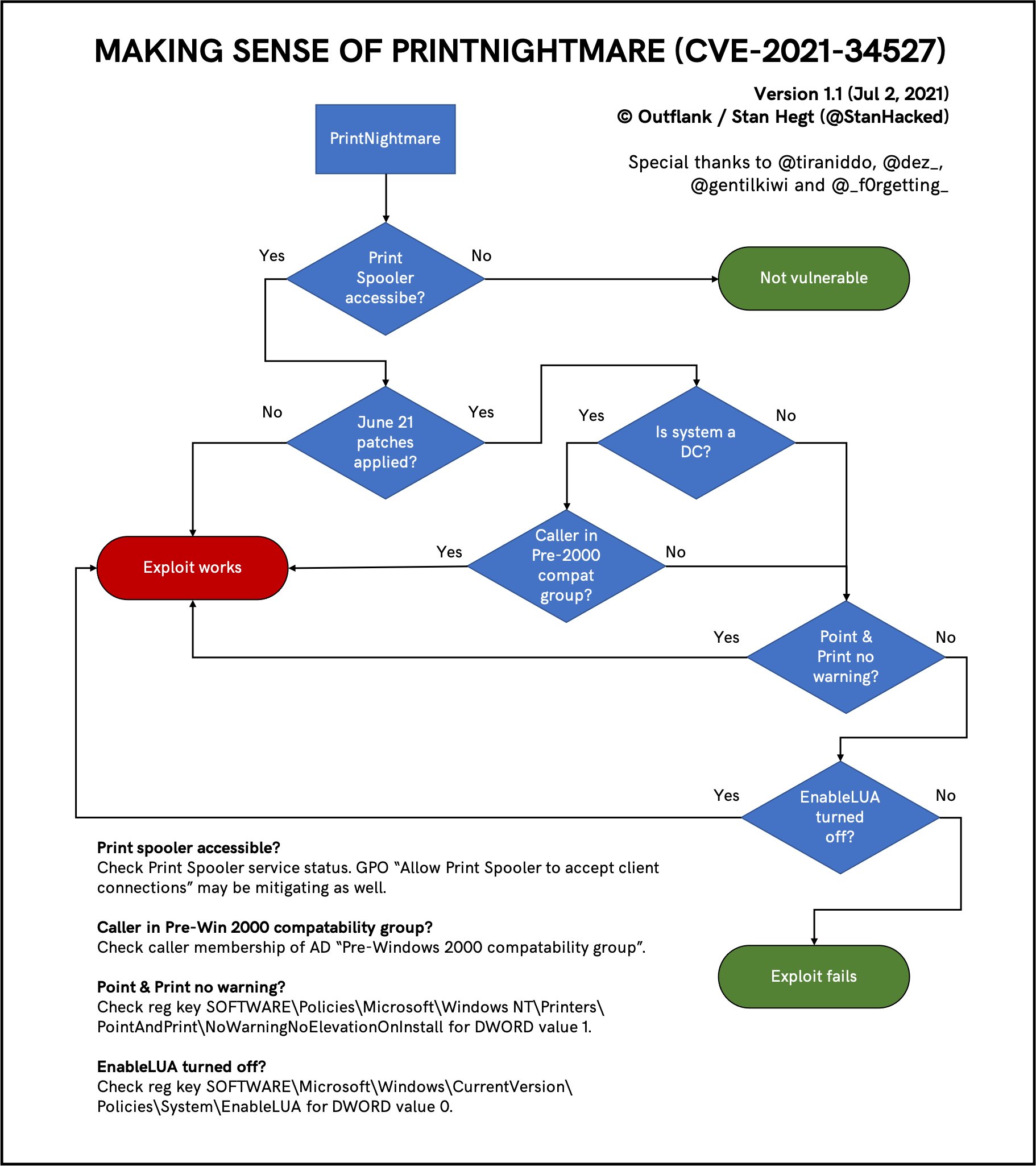 It should be not be confused with CVE-2021-1675. PrintNightmare is not the same not the same as CVE-2021-1675, which was fixed in the patch in June, there is currently no patch available for PrintNightmare. You can read a writeup of the former CVE here –> Exploit on Windows 10, or escalation of privileges “made in Poland” – Cybersecurity – Blog AFINE Cyber Academy

There will also be more information from US CERT on the subject here as well –> PrintNightmare, Critical Windows Print Spooler Vulnerability | CISA

It should be noted that there are still no known sources of any ransomware, worms, or others that are actively using this vulnerability yet.

There are already multiple PoC available on GitHub which provides information on how to use it, example –> afwu/PrintNightmare (github.com).

However, the critical part is for Print Servers / Domain Controller and other servers with a LOCAL privilege escalation such as Citrix / VMware or other terminal services. Where often print is much used.

For all systems where the print spooler service is not required (it is enabled by default) remember to disable the service, preferably update with the latest patches https://lnkd.in/d8mGsb2 (NB: Still sources are stating that the patch does not fix the issue) so please do both)

The print spooler service can be done using CLI/PowerShell

You should also enable PrintService/Operational log for servers that require Print Spooler running for the time being.

If you are using 3.party print tools with their own unified print driver is still relies on the native print spooler service and is therefore still vulnerable to this attack. This applies to like ThinPrint, Tricerat, and other native 3.party print solutions.

If you want to collect and look after events from within Azure Sentinel / Log Analytics you need to collect the specific event log using data collection rules and collect from two custom log sources.

You can use the following Kusto Query via Microsoft Defender to determine if there has been modifications to the Print driver folder 2021-1675 – PrintNightmare KQL – MDE (github.com)

Qualys customers can scan their network with QID 91772 to detect vulnerable assets with Qualys vulnerability manager.

What about Universal Print?

So far it seems that this vulnerability does not affect session which are using Universal Print from Microsoft.

After working with Azure AD for a looong time I always forget how complex it has gotten over the years, with all the new features and capabilities that have been introduced. Therefore, I decided that Read more…

Just a quick post, after a recent signature update to Microsoft Defender (This one –> Antimalware updates change log – Microsoft Security Intelligence)  you might get these events from Defender. This was a false positive and Read more…

Getting started with Microsoft DevBox

Earlier today, Microsoft released DevBox into Public Preview (which is a feature that was announced at Microsoft build earlier this summer. Microsoft DevBox can be seen as an alternative to Windows 365 and Azure Virtual Read more…