Earlier today a new Security Vulnerability was disclosed in the popular OpenSSL (libssl) Library (affecting products using OpenSSL 3.0.0-3.0.6.) which affects most software companies in the world. The OpenSSL team released an updated version of the library today 3.0.7.

NOTE: The chances of being able to exploit this vulnerability is really low, since there are a lot of requirements that needs to be in place for someone to be able to successfully exploit it, more details here –> Pwn All The Things on Twitter: “Folks who’ve been up for a while waiting for this “critical” #openssl vulnerability, here it is. Quick thread of initial thoughts https://t.co/XrAm4YAuUo” / Twitter

Most Linux distros these days are bundled with the affected versions. 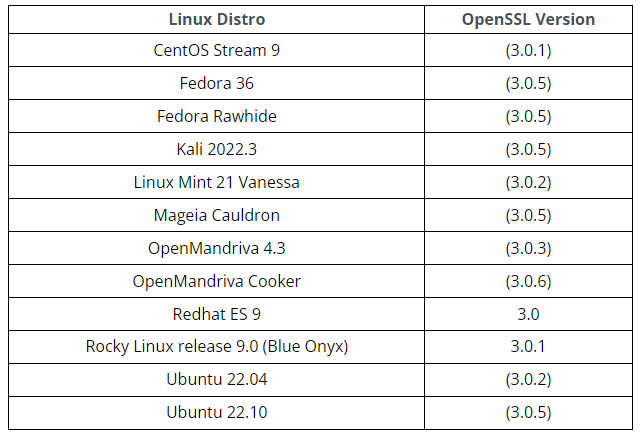 How severe is the vulnerability?

The information about the vulnerability came out today (Spooky SSL) and it affects a smaller set of machines. Akamai did some tests on their managed networks and saw

There is limited information about which vendors and products are affected, but there is an unofficial list here –> https://lnkd.in/dQweeCu8

This website also contains different methods to verify the presence of the OpenSSL product is installed in your environment as well.

It also shows what kind of tools and scripts can be used to detect if you have the affected version within your environment.

Why is it predominantly Linux software that is affected? Windows has another SSL library called SChannel which is not affected by this vulnerability. However, Windows can also have the library installed. OpenSSL is used in software like VMware tools which is installed on most machines running on VMware.

To remove the vulnerability for products like VMware you have to wait for them to provide an update to their product.