Earlier today (16th of April) FHI together with Simula launched their new app SmitteStopp (referenced here –> https://helsenorge.no/smittestopp#Slik-virker-appen) here you can read more about how the application functions and also what kind of data it collects. Now I was curious how this was setup on the backend which is running in Microsoft Azure so I decided to do a bit digging, since this service was setup in Azure and also something I’m skeptical about.

Now I know that there has been a team of experts involved into evaluating the security of the applications and the service in general, but I’m still a bit skeptical about how much they looked and evaluated the backend design and services.

NOTE: I collected data from my DNS logs and together with public information that was available here –> https://www.fhi.no/contentassets/72bffef9f021424d965d93866a82f930/dpia-smittestopp.pdf which gave some insight into what was being used in the backed. Also some of this is speculation since I do not have access to the backend resources.

First of Smittestopp is running on the Azure datacenters in Ireland. Why not Norway or West Europe?
The application and service is using a set of different features which as of now is not available in the Azure Norwegian datacenter. such as one of the features is the IoT Hub, you can view the services availability here –>  (https://azure.microsoft.com/en-us/global-infrastructure/services/?regions=norway-east,norway-west,europe-west,europe-north&products=all) so in order to collect the data and process it in the same location the went with North Europe.

Now why not West Europe? This can be a deliberate choice but! the last couple of weeks, West Europe has had capacity issues and Microsoft has put restrictions on it compared to other (https://telecoms.com/503376/microsoft-places-restrictions-on-azure-as-demand-increases-by-775/) . So North Europe is the logical choice.

Another feature that this service is using is a feature from Microsoft called Azure AD B2C with a Phone based authentication method. This is the mechanism which allows you to register your device using just your phone number. Essentially this service (https://docs.microsoft.com/en-us/azure/active-directory-b2c/phone-authentication)

Once you have signed up, the device is authorized and will start to transmit data using MQTT v3.1.1 on port 8883 over TLS to the IoT Hub. Which is then processed somehow (I’m guessing Stream Analytics) into Data lake gen 2 and SQL Database. 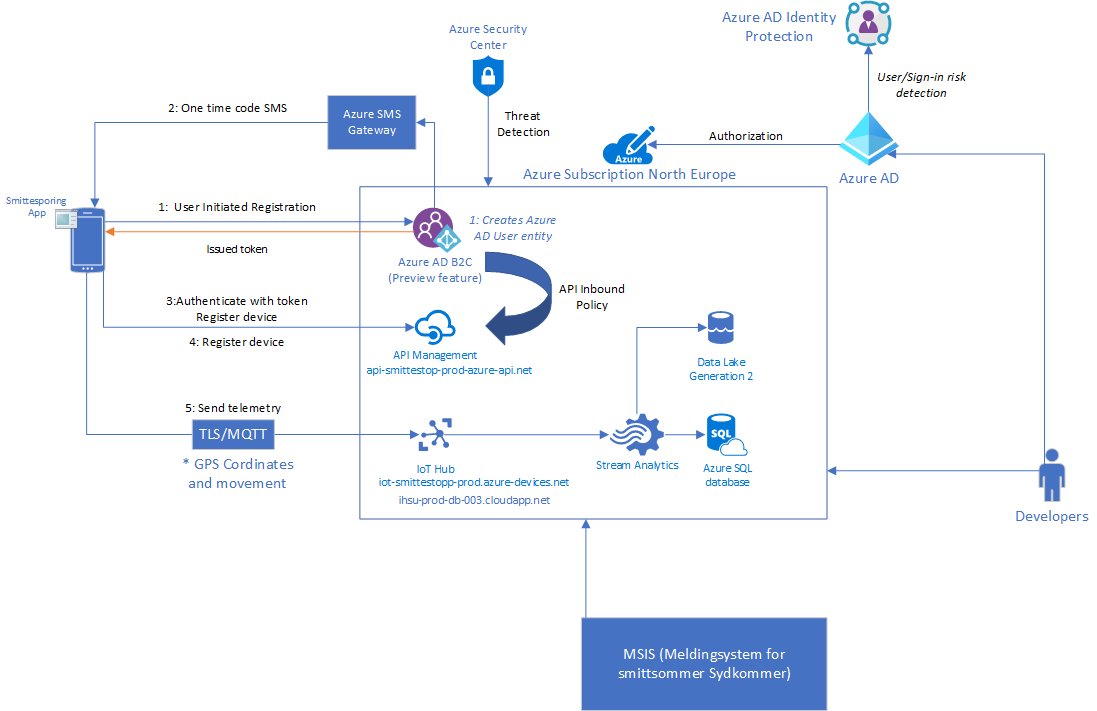 Now many have had issues completing this sign-up part here with getting an SMS and signing up, one reason for that the Azure AD B2C Phone registration feature is in preview from Microsoft, and when Microsoft has a feature in preview in Azure it means that there is no guaranteed SLA, secondly the scale of the service might not be as it would be when it hits general availability.

So far in addition to some of the security services that has been mentioned it gives me this overview picture which is shown above. Now looking at the setup there are a couple of things that I will raise a red flag, since I don’t have the insight on the backend this is purely speculations, but I’ve seen this so many times before in other enviroments.

I have seen my fair share of bad configuration and using default settings, so I hope that Simula and FHI have taken serious consideration on how the backend is configured to ensure proper access control, logging and monitoring and encryption of data.

A long time ago I wrote a blog post around Microsoft RDS vs Citrix XenDesktop at the time where I looked at the overall functionality and end-user experience, which you can read about here  https://msandbu.org/so-why-choose-citrix-over-microsoft-rds-2/ (and Read more…

Streaming of audit logs from Oracle Cloud to Microsoft Sentinel

With the recent announcement of a new partnership between Microsoft and Oracle for Oracle database services, I wanted to look further into setting up log collection from Oracle Cloud to Microsoft Sentinel. When I started Read more…